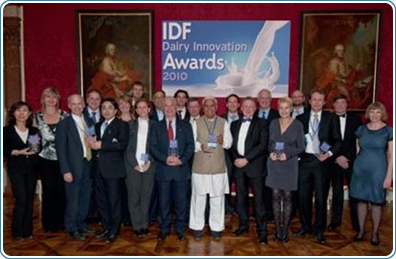 When we are about to celebrate Swarnim Gujarat, Amul has brought one more laurel not only for Gujarat, but for whole of India

At a celebratory gala dinner at the Knight's Hall, Residenz Palace, Salzburg, Austria on 28 April 2010, attended by over 150 dairy industry representatives from all over the world Mr. Richard Doyle, President, International Dairy Federation, presented an award to Shri Parthibhai Bhatol, Chairman, and Dr. S. T. Desai, General Manager (Cooperative Services and Administration), GCMMF (Gujarat Co-operative Milk Marketing Federation Ltd.). The award was given to GCMMF (Amul) for the best environmental initiative in the "sustainability category" during the 4th Global Dairy Conference held from 27th April to 29th April 2010 at Salzburg Congress Centre, Austria.

IDF, every year gives dairy innovation awards to its members in various categories like brand and products, nutrition and health, sustainability, packaging, ingredients and marketing.

The inaugural awards programme attracted over 170 entries from 29 countries in 12 categories, designed to reward and champion innovation and excellence in the global dairy industry.

The award has been given to Amul by IDF for its environmental initiative for tree plantation. . As a first step on 15th August 2007 the milk producers of more than 15,000 village dairy cooperative societies planted 18.9 lakh tree saplings across 19 districts of Gujarat, after the flag hoisting ceremony. Initially "One member, one tree plantation" was the basis. Inspired by the thumping success, they carried out similar exercise on 15th August 2008 on "one member, three tree plantation" basis, in which 52.74 lakh tree saplings were planted.

In the year 2009, the milk producer members again conducted mass tree plantation drive on Independence Day. After the flag hoisting, each member took an oath to look after the sapling till it grows into a tree. Upgrading the green movement, they planted around 84.04 lakh saplings on "one member, five tree plantation" basis. Hence in the last three years milk producers of Amul have planted around 155.68 lakh tree saplings.

Amul has been in the forefront of White Revolution through milk cooperative movement since independence. Now, by receiving this award, it has shown the resolve of the milk producers towards betterment of our environment through tree plantation.

The Award was on GCMMF (Amul) in recognition of the untiring efforts of its milk producing members and the employees of the dairies for their commitment for betterment of environment.