About Us - The Amul Model

The Birth of Amul

The seeds of this unusual saga were sown more than 74 years, a small town in the state of Gujarat in western India. The exploitative trade practices followed by the local trade cartel triggered off the cooperative movement. Angered by unfair and manipulative practices followed by the trade, the farmers of the district approached the great Indian patriot Sardar Vallabhbhai Patel for a solution. He advised them to get rid of middlemen and form their own co-operative, which would have procurement, processing and marketing under their control.

In 1946, the farmers of this area went on a milk strike refusing to be cowed down by the cartel. Under the inspiration of Sardar Patel, and the guidance of leaders like Morarji Desai and Tribhuvandas Patel, they formed their own cooperative in 1946.

This co-operative, the Kaira District Co-operative Milk Producers Union Ltd. began with just two village dairy co-operative societies and 247 litres of milk and is today better known as Amul Dairy. Amul grew from strength to strength thanks to the inspired leadership of Tribhuvandas Patel, the founder Chairman and the committed professionalism of Dr Verghese Kurien,who was entrusted the task of running the dairy from 1950.

The then Prime Minister of India, Lal Bahadur Shastri decided that the same approach should become the basis of a National Dairy Development policy. He understood that the success of Amul could be attributed to four important factors. The farmers owned the dairy, their elected representatives managed the village societies and the district union,  they employed professionals to operate the dairy and manage its business. Most importantly, the co-operatives were sensitive to the needs of farmers and responsive to their demands.

At his instance in 1965 the National Dairy Development Board was set up with the basic objective of replicating the Amul model. Dr. Kurien was chosen to head the institution as its Chairman and asked to replicate this model throughout the country.

The Amul Model of dairy development is a three-tiered structure with the dairy cooperative societies at the village level federated under a milk union at the district level and a federation of member unions at the state level. 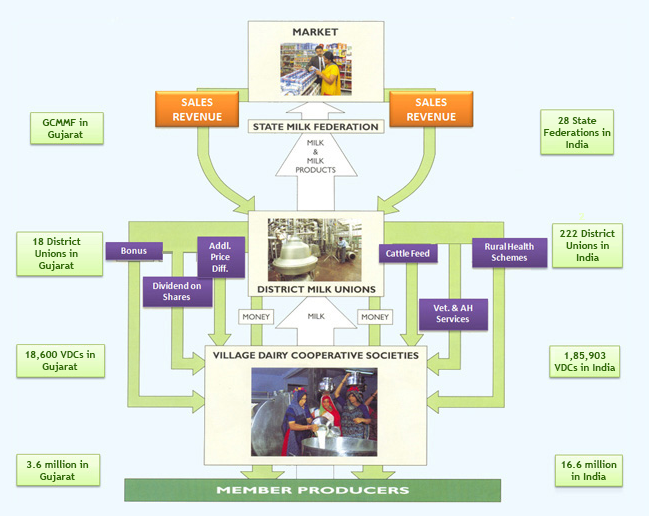 The Amul Model has helped India to emerge as the largest milk producer in the world. More than 16 million milk producers pour their milk in 185903 dairy cooperative societies across the country.
Their milk is processed in 222 District Co-operative Milk Unions and marketed by 28 State Marketing Federations, ensuring a better life for millions.