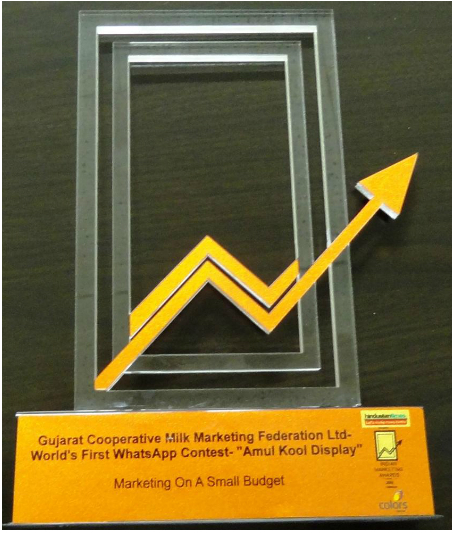 GCMMF received Bronze Trophy at the Indian Marketing Awards at New Delhi on 12th December 2014 for their entry on 'World's First WhatsApp Contest – Amul Kool Display' in the category of Marketing on a Small Budget.

GCMMF conducted world's first WhatsApp Contest – "Amul Kool Display" for 1 million plus retail outlets based in various parts of the country. To take part in the contest, contestants (our retail shopkeepers) had to take a Selfie with the Amul Kool (Beverage Brand of Amul) display and then send the picture to our corporate WhatsApp number (7359583333), which was specifically activated for this contest.

Winners were selected everyday on the basis of attractiveness, innovativeness and the use of maximum different packs of Amul beverage range. The selected winners were also announced through Amul's Facebook contest page : www.facebook.com/Koolcontest

One Mega winner (Retailer) was selected each day. The photograph of the retailer (Mega Winner) along with the photographs of his wholesale distributor (WD) and WD Salesman were displayed on the National Television Channel Set Max during the live screening of IPL7 in May 2014.