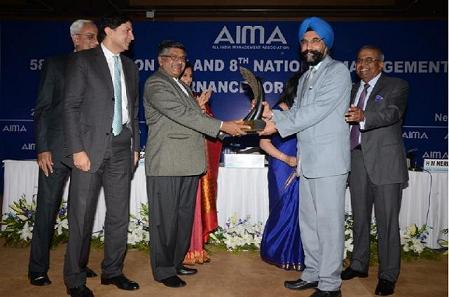 All India Management Association (AIMA), the national apex body of management profession in the country is committed to enhancing the competence of management profession through its multifaceted activities.Every year, to recognize excellence in Management, Entrepreneurship and Leadership, AIMA confers Awards on distinguished professional and organizations who have made outstanding contribution.To recognize and celebrate the marketing success of a brand, AIMA and R K SWAMY BBDO instituted the "AIMA - R K Swamy High Performance Brand Award" in 2009.

For the year 2013, Mr.Srinivasan Swamy, Jury Chairman & Past President,AIMA alongwith other distinguish corporate leaders unanimously decided to bestow award on brand "Amul" of Gujarat Co - operative Milk Marketing Federation Ltd. (GCMMF), for the year 2013. GCMMF is largest food products marketing organization of the country with annual turnover of Rs.13735 crores during the year 2012 - 13

This award is reorganization of this path breaking achievements of GCMMF which has successfully used commercial marketing to enrich the lives of millions of farmers. It has achieved market leadership in all the categories that it operates be it Pouch milk, Butter, Cheese, Ghee, Ice Cream etc. reflecting the consumer confidence brand "Amul" enjoys.

Mr. R S Sodhi, MD GCMMF said "our brand Amul has shown tremendous growth and growing at the rate of 20% CAGR since last five years . For the current year,we are expected to grow at 30% and would reach turnover of Rs. 18,000 crores".

The award will be presented during AIMA's 58th Foundation Day and National Management Day, scheduled to be held on 21st February 2014, at New Delhi. The award presentation ceremony will be held during a special plenary session. Mr. R S Sodhi will receive the award on behalf of 3.5 million farmers of GCMMF who own "Amul" brand.

The past recipients of this prestigious award have been State Bank of India (2009),Life Insurance Corporation of India(2010),Wipro Technologies(2011) and Apollo Tyres(2012)